Everything will be Alright in the End 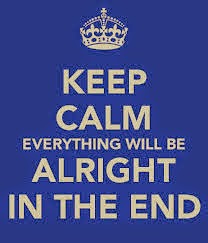 Today I had one of those days where fear and self-doubt crept into my psyche. Yes, it happens to the best of us. When my bestie was not available to give me a good pep talk, I went through all my usual coping strategies when left to my own devices.

First, I used a strategy given to me by my personal Coach. I wrote out all of my negative thoughts onto a page until my head was empty. Then on a new page, I rewrote everything in the opposite and positive form. Let me tell you this process alone is very transformative, and I also threw in some EFT along with it. The final step is to burn the page with those negative thoughts. That's right. Burn it.

Watching it burn is a very satisfying experience. It's a really great way to let it all go. A cleansing ritual for the soul. I use it with my clients, and it's something anyone can easily do on their own. Try it. Hold the paper over a big, metal bowl as you light it, then place it in the bowl. Burn, baby burn!

Secondly, I surfed the web for some inspirational videos. These always pump me up and shift my energy. In fact, I felt so energized that I felt inspired to "take on" the basement. Now, let me explain what I mean by "taking on" the basement. Figuratively speaking, there lies a sleeping dragon down there. This dragon is really, really big and it breathes fire. So, I prepared for battle.

Literally speaking, the basement is a f*%@ing mess, filled with copious amounts of unneeded and unwanted stuff that has been stashed down there over an accumulated 15 years or so. It's not my basement. It's my mother's (shhhh, don't tell her I told you). But, I can't totally excuse myself from the problem, as I am part of it. Some of that stuff stashed down there is mine.

So down I go with visions of totally slaying that dragon. I had visions of boxes being perfectly shelved and all things in order in the end. I was down there the whole afternoon and part of the evening. I went through waves of anger and disbelief at the state of it all. Meanwhile, the dragon is breathing fire down my neck, and I really feel like I'm doing battle.

In the end, I felt totally defeated, and I surfaced with the thought that I hate my life right now. Not good. I know.

Now I really need an escape. This time, to save my sanity, I watched a movie. The Best Exotic Marigold Hotel. If you haven't seen it yet, I highly recommend it. It's set in India, and it heralds some really great life lessons.

Here are some that jumped out at me:

The only real failure, is the failure to try. And the measure of success is how you cope with disappointment, and you always must. Don't fall into being too scared with disappointment to start it all again. Get up in the morning, and do your best. Nothing else matters.

All we know about the future, is that it will be different. But perhaps what we fear, is that it will be the same. So, we must celebrate the changes because as someone once said "everything will be alright in the end, and if it's not alright, then trust me, it's not yet the end".

This last one made me reevaluate the progress that I had made in the basement and acknowledge my hard work and effort. In some ways, it looked more chaotic, but I had done A LOT! Despite my disappointment, things did change. And sometimes, things get worse before they get better. So, I had given that dragon an ass-kicking afterall. I reminded myself that everything will be alright in the end, and if it's not alright (or finished), then trust me, it's not yet the end. So, I'm gonna get up in the morning, start it all again and give it my best. Nothing else matters.

Okay now get out there in the world and kick some ass you!